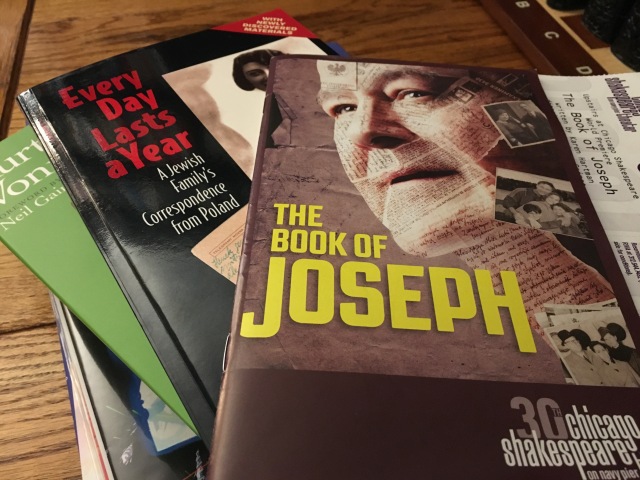 The Book of Joseph, a biographical play based on correspondence collected in Every Day Lasts a Year, runs through March 5 at the Chicago Shakespeare Theater.

The story told in The Book of Joseph is simple, true, and fraught with loss. In Kraków, Poland, 1939, Joseph Hollander — Jewish, enterprising, and alert to the approaching storm of hate and death — arranges a swift departure to safer places for himself and his large, loved family: mother, sisters, in-laws, nieces. But they decline to leave, calmly convinced that (to echo a novel published three years earlier an ocean away) it can’t happen here. Only Joseph knows it can. They stay; he leaves, intent on securing their escape somewhere down the line.

Then there’s a second story, without which we would have far less access to the first. Baltimore, Maryland, 1986: in the wake of Joseph’s death, his adoring grown son Richard finds a briefcase full of letters postmarked from Poland, stamped with swastikas, dating from the early 1940s, written by the Hollanders, under deepening duress, to the their cherished, distant son, now dwelling precariously in America and still trying like hell to get them out.

Entwining these two stories, from the middle and the end of the twentieth century, The Book of Joseph documents the Hollander family’s wholeness and its sunderings.

Our family shares a great enthusiasm for talk, talk, talking about what we read, see, do, think. This, coupled with my mental quilting — stitching this experience to that book to this film to that exhibition, and so on — is how I learn (and how I learn how much remains to be learned). So, on the long drive from Chicago, my husband and I discussed The Book of Joseph. The second act, which, I pointed out, propelled the material from quite good to must-see, focuses on who will tell the — “Who lives? Who dies? Who tells your story?” I offered. My husband acknowledged the Hamilton reference. The Book of Joseph is a Holocaust story, but it is a family story first. What parts of their narrative will survive? Who will remain to tell their story? How will it be told? Will it be told?

This play deserves a wide and appreciative audience. Reviews here and here, and I heartily agree with Chris Jones: Sean Fortunato, gives “the performance of his professional life” as Joseph Hollander.

Speaking of mental quilting, by the way, before I saw her name, I recognized Amy Carle’s face: She read the female lead in The Hill You Die On. Her Neve roams the rooms of my imagination still. (I’ve republished my entry from that evening here.)

3 thoughts on “Who tells your story?”

● Villette
Charlotte Brontë; 1853
With the APS Together.

© 2015-2022
Unauthorized use or duplication of this material without express and written permission from this site’s author is strictly prohibited. Excerpts and links may be used, provided that full and clear credit is given with appropriate and specific direction to the original content.