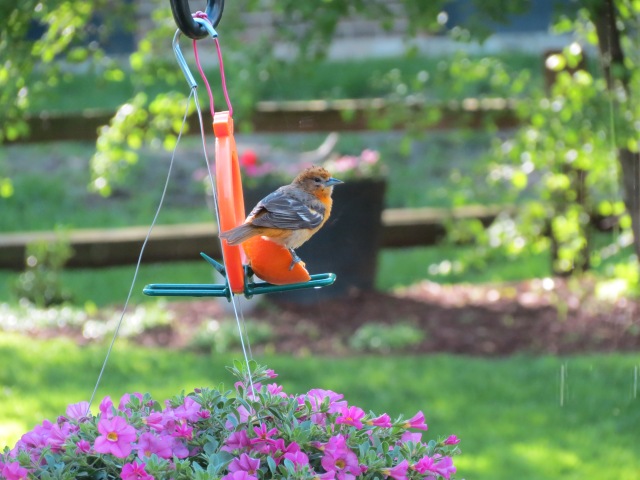 The orioles arrived before May concluded, but we have not yet espied the indigo buntings — in the yards or on the bike trail. And now it is June. In fact, it is fiercely June: The rains abruptly concluded about ten days ago, and the grass, which has assumed a slightly o’ercooked tan-green hue, sighs, “More water, please,” as it crunches underfoot.

We have enjoyed some terrific theater since I last wrote: Not about Nightingales at the Raven, Pass Over at Steppenwolf, and Great Expectations, a Remy Bumppo and Silk Road Rising collaboration.

We had not been to the Raven since All My Sons in 2014. The excellent performances in Nightingales, an early and uneven Tennessee Williams work, ensured that we will make returning a priority.

Steppenwolf Theatre Company’s Pass Over (which features ensemble member Jon Michael Hill — popularly recognizable for his Elementary gig) leans heavily but effectively on the structure of its chief influence, Beckett’s Waiting for Godot, and its leads, Hill and Julian Parker, deliver compelling, get-out-your-chair-and-applaud performances. (Added bonus: Hill and Parker are Illini!) If you’re in the area, you should see this one.

You should also see the collaboration of Remy Bumppo Theatre Company and Silk Road Rising, in which Pip’s “great expectations” take him from his small Indian village to colonized Calcutta. (More information here; review here.)

We also saw the National Theatre Live broadcast of Rosencrantz and Guildenstern Are Dead, featuring Daniel Radcliffe. Catch a rebroadcast, if you can.

Do you listen to podcasts? Our drive in and out of Chicago yesterday was punctuated by the first three episodes of S-Town. Fans of both seasons of Serial, we all agree Brian Reed’s narrative style outstrips that of Sarah Koenig: Hers were great stories adequately told; his is a good story well told.

That said, the spoiler-ish “Was the Art of S-Town Worth the Pain?” (The Atlantic, April 9) has made. me. think.

Evaluate the moral price of producing good art and what damage it might cause to those involved when their secrets are instantly available for the entertainment consumption of thousands or millions of listeners. ­­S-Town may be a groundbreaking new kind of podcast; it also, like many poems, memoirs, and articles before it, confesses other people’s pain in a public—and at times questionable—way.

Speaking of episodes, my husband and I must catch up on 8 and 9 of The Handmaid’s Tale before the finale this week. (I hope you’re all watching.)

When I’m not watching (or backyard birding or biking or writing or…), I am, of course, reading, and my participation in the “Shakespeare in a Year” project is going particularly well. In fact, finishing The Rape of Lucrece early last month put me ahead of schedule. My remarks on the poem:

Last year, I read Cymbeline in anticipation of seeing a Shakespeare Project of Chicago production; and more recently, I stumbled on a film that imagines Cymbeline as a conflict between a motorcycle gang and corrupt police. As I read The Rape of Lucrece, then, I was immediately reminded of the Posthumus, Iachimo, and Imogen storyline.

Fundamentally, the similarity between Imogen’s story and Lucrece’s, the origins of both of which are ancient, is that their husbands publicly rhapsodize on their beauty and chastity — and thus, embolden their listeners. The husbands’ lack of circumspection leads to the violation of their wives. What a theme, eh? The listener in Cymbeline is Iachimo, who spends an uncomfortable amount of time ogling Imogen as she sleeps before stealing a trinket. He later lies about enjoying her bed. In The Rape of Lucrece, the listener is Tarquin, who also leers at the slumbering wife before violating her.

On hearing Iachimo’s false claims, a jealous Posthumus arranges for Imogen’s death. Of course, when the duplicity is uncovered at the conclusion of the play, Posthumus and Imogen are reunited. Yes, I am aware that we are readers “out of time,” so to speak, but I remain as horrified by their rekindled relationship as I am by that of Hero and Claudio in Much Ado. (Would that Benedict had killed Claudio, but, then, that’s not a comedy, is it?) How does the idea that one’s partner wished her dead inform the union?

Unlike Imogen, who is initially unaware of the attack on her reputation, the raped Lucrece determines to tell her story and name her attacker. That she sees death as the only release from her shame resonates in this, a month in which many are talking about a television show that depicts the rape and suicide of a high school student who, with her recorded note, tells her story and names her attacker. Shame transcends time, apparently, as do jealousy, lechery, and sexual violence.

In one of those moments of serendipity / synthesis / synchronicity, we visited the Art Institute not long after I had finished the poem and posted to the “Shakespeare in a Year” group. Now Tintoretto’s Tarquin and Lucretia, always unsettling, is forever stitched to my reading.