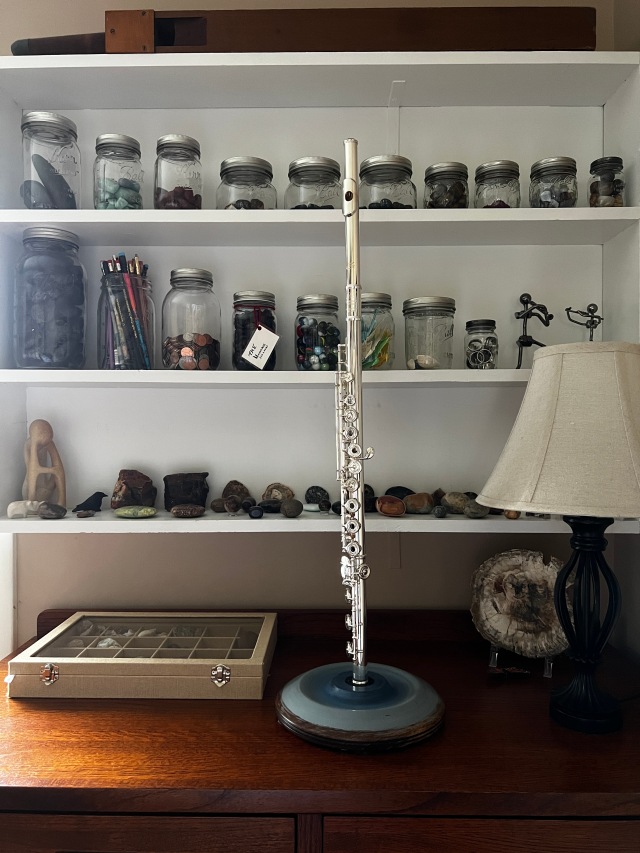 In late July, I played the Allegro Molto from Schubert’s Sonatine in D Major in my very first in-person recital — a solid performance. Soon after, I entrusted my wonderful flute to a new (to me) technician for its annual COA. (In July 2021, my previous technician closed his business and retired.) It was returned to me in beautiful condition, but in August, I visited Ollivanders, I mean, Flute World, where my new wand flute chose me. More experienced instrumentalists than I will attest to the fact that an upgrade can do remarkable things for one’s confidence playing. And they are so right.

My current solo piece is Gabriel Fauré’s “Pavane.” I’m also working on page 10 of Robert Cavally’s Melodious and Progressive Studies from Andersen, Gariboldi, Koehler, and Terschak for Flute, Book 2, and “Duetto No. I (based on Sonata in B flat, K. 378)” (Mozart) in Selected Duets for Flute, Volume II (Advanced). It’s been a long slog, but I’ve (finally) made it to 111 in P. Bona’s rhythmical articulation studies.

And after much discussion, my husband and I decided to change bands. Joining the local community band has saved us 2.5 hours a week of driving — and in one semester and three concerts, measurably improved our skills. Rehearsals start up again in a few weeks. Given my other pursuits, then, my practice schedule will remain largely unchanged:

In May, I acquired a beautiful alto flute. What a sound! I took private lessons throughout the summer and fall with the idea that I might accept a few alto parts in flute ensemble. Because the flute ensemble remains fairly informal and still has no performance plans, I bowed out for a bit to focus on band music, but in the coming months, I will add the alto back into my practice at least twice a week.