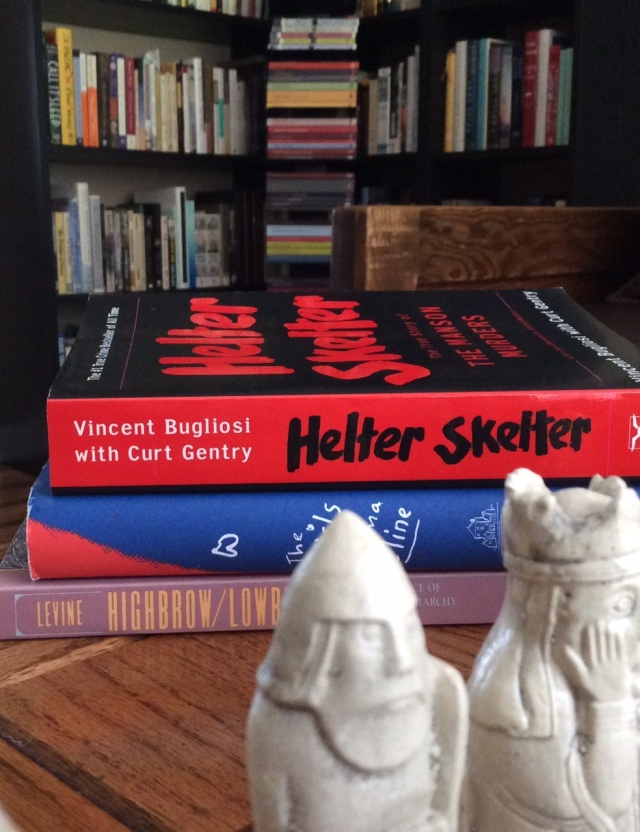 Summer began in earnest this weekend, didn’t it? The wall of heat just beyond our home’s entrances — ugh. Still, we were able to take two ten-mile rides and to sit out in the yards for a time in both the mornings and the evenings. We love to watch our many feathered visitors. With profuse thanks to the air-conditioning gods, we cooked good meals and desserts this weekend, too, and practiced music, studied, finished Season 7 of The X Files, and, of course, read.

After swallowing whole Emma Cline’s The Girls (which is a recommendation, of course), I went in search of my copy of Helter Skelter and finally read it (which is another recommendation — of both the novel and the non-fiction work). Cline nailed the idea of a girl’s search for self-definition in the measuring looks / glances of others, particularly men. One reviewer took the novelist to task for not immersing Evie in the cult’s horror, but to me, that was the point: She was defined by her association, however brief or peripheral.

For the commonplace book:

p. 27
Back then, I was so attuned to attention. I dressed to provoke love, tugging my neckline lower, settling a wistful stare on my face whenever I went out in public that implied many deep and promising thoughts, should anyone happen to glance over. As a child, I had once been part of a charity dog show and paraded around a pretty collie on a leash. How thrilled I’d been at the sanctioned performance: the way I went up to strangers and let them admire the dog, my smile as indulgent and constant as a salesgirl’s, and how vacant I’d felt when it was over, when no one needed me anymore.

I waited to be told what was good about me. I wondered later if this was why there were so many more women than men at the ranch. All that time I had spent readying myself, the articles that taught me life was really just a waiting room until someone noticed you — the boys had spent that time becoming themselves.

p. 99
The possibility of judgment being passed on me supplanted any worries or questions I might have about Russell. At that age, I was, first and foremost, a thing to be judged, and that shifted the power in every interaction onto the other person.

p. 103
There are those survivors of disasters whose accounts begin with the tornado warning or the captain announcing engine failure, but always much earlier in the timeline: an insistence that the noticed a strange quality to the sunlight that morning or excessive static in their sheets. A meaningless fight with a boyfriend. As if the presentiment of catastrophe wove itself into everything that came before.

p. 351
It was a gift. What did I do with it? Life didn’t accumulate as I’d once imagined. […] I paid bills and bought groceries and got my eyes checked while the days crumbled away like debris from a cliff face. Life a continuous backing away from the edge.

And from Helter Skelter:

p. 52
Autopsy reports are abrupt documents. Cold, factual, they can indicate how the victims died, and give clues as to their last hours, but nowhere in them do their subjects emerge, even briefly, as people. Each report is, in its own way, the sum total of a life, yet there are very few glimpses as to how that life was lived. No likes, dislikes, loves, hates, fears, aspirations, or other human emotions; just a final, clinical summing up: “The body is normally developed… The pancreas is grossly unremarkable… The heart weighs 340 grams and is symmetrical…”

Yet the victims had lived, each had a past.

One thought on “Weekend. Reading.”

● A Swim in a Pond in the Rain: In Which Four Russians Give a Master Class on Writing, Reading, and Life
George Saunders; 2021