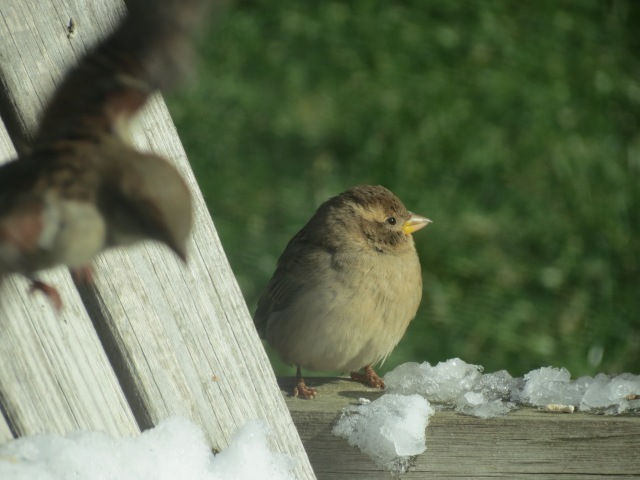 As I shared here, the bird I first espied this New Year’s Day was a house sparrow — one of a sizeable tribe that calls our yards home. After making my Project FeederWatch observations this week, I captured a few images. Would that I had had the camera out when the hawk chased several birds into the picture window and then stunned itself on it! (All survived the mishap.) It has been cold, so I have not yet removed the ghostly bird prints etched into the glass surface.

■ We first saw the Q Brothers more than three years ago at the Chicago Shakespeare Theater (CST). Their Othello: The Remix, an “ad-rap-tation” of Shakespeare’s play, rendered us immediate and forever fans of the Brothers and their crew. We have seen The Remix six times and A Q Brothers’ Christmas Carol three times; and we traveled more than three hours to see Q Gents at the 2015 Illinois Shakespeare Festival. So, yes, I am biased, but from the moment Hamilton first edged into the news, I have thought, “GQ and JQ have been robbed.” Make no mistake. I believe Lin-Manuel Miranda is wildly talented, but he was working ground the Brothers had already broken. It delights me that someone else thinks so, too:

Lest anyone think these B-boys are riding on Hamilton’s red coattails, writers-directors-stars-siblings GQ and JQ pioneered hip-hop theater back in 1999 with their uproarious The Bomb-itty of Errors, inspired by Shakespeare’s similarly titled romp.

Othello: The Remix is currently playing at the Westside Theatre in NYC, and folks are enjoying it. (NYT review here.)

■ Even though I think the Q Brothers should be recognized for their role in transforming the American musical, I would be lying if I said we weren’t all beyond excited about seeing Hamilton over winter break. And, no, I haven’t any “How we scored tickets” stories. Ticketmaster. Straightforward and simple. None of us can believe our good luck. We will also see The Winter’s Tale and King Charles at the CST, that latter of which has been well reviewed (here and here). Oh, and Pygmalion at Remy-Bumppo. These adventures may well be the exclamation marks that punctuate our staycation.

■ A couple of other things we think will shape our break: The Hollow Crown: The Wars of the Roses. “Master Drawings Unveiled: 25 Years of Major Acquisitions.” Quirkle Cubes and Ticket to Ride. The weather!

■ Early in the semester, my daughter wanted a copy of Arrowsmith (Sinclair Lewis) because it is one of her physics professor’s favorite books. Later in the semester, it was The Forever War (Joe Haldeman). Both were on our shelves, so when I heard she was reading the latter during her mini study breaks, I pulled it down. I cannot wait to hold our informal book club meeting. In other reading news…

The perseverance in this world, despite it all, of things done right.

That sentence describes the “point” of The Last Policeman (Ben H. Winters) perfectly. I so adored the first of the trilogy that I’ve actually prevented myself from turning to the second book; I don’t want to be disappointed.

While my husband continues to study for his certification exams this weekend, I hope to finish (finally) Life Reimagined (Barbara Bradley Hagerty). I also have this week’s comics and a stack of magazines.

■ I cannot believe I never mentioned that The Americans became my small-screen obsession (s-so) when I finished with Mr. Robot. Wow! Amazing acting, compelling storytelling. Highly recommended. My next s-so will likely be Rectify but not until mid-January, when my daughters head back to university.

One thought on “The year of the house sparrow”

● The Storytelling Animal: How Stories Make Us Human
Jonathan Gottschall; 2012

● Providence of a Sparrow
Chris Chester; 2002