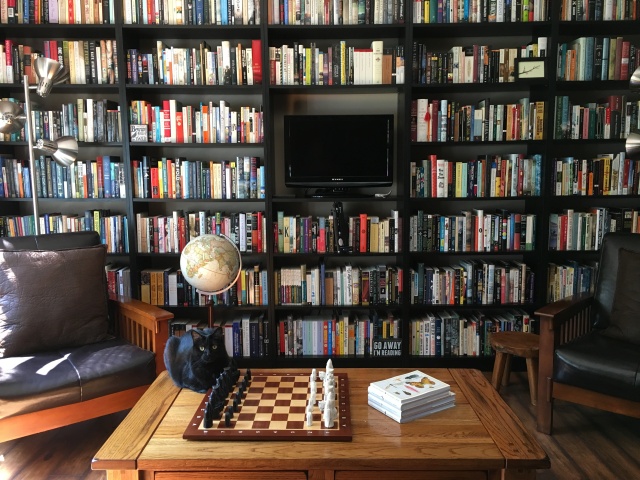 Since my mid-year review, I have read sixty-six books, for a total of 157 this year. An unrepentantly promiscuous reader, I could easily add thirty more titles to my annual list — books left in various stages of “undress” — but, as always, I have included only cover-to-covers.

▪ My participation in the “Shakespeare in a Year” project accounts for forty of those titles and may also explain the thirty-four-book increase over last year’s 123.

▪ “Shakespeare in a Year” was not the only challenge I undertook in 2017. This was also the year I (finally!) read War and Peace.

▪ I exceeded my two perennial goals — Read at least one non-fiction work every two weeks and Read more poetry — by finishing twenty-nine non-fiction books (six of which were graphic works, including the three volumes of John Lewis’ remarkable memoir, March) and reading each of Shakespeare’s 154 sonnets, as well as Venus and Adonis and The Rape of Lucrece.

▪ Forty-one of the books I read were published this year. (Last year, I read forty-six books published in 2016.)

Other notes: This year, I reread a number of books that were as good if not better than they were when I first (or, in some cases, last) read them. (I have not included Shakespeare’s plays in this discussion.) To me, Reread generally equals Highly recommended, so consider these well worth your time:

Finally, the following are the books I’d like to recommend — again, in several cases:

■ So Long, See You Tomorrow (William Maxwell; 1980. Fiction.)
As much a meditation on loss and grief as it is an exploration of memory and how memory shapes (and haunts and robs from) the present, William Maxwell’s 1980 novel is as perfect a book as A Good School or Revolutionary Road (both by Richard Yates) or Olive Kitteridge (Elizabeth Strout). You’ll find commonplace book entries here.

■ World of Trouble (Ben H. Winters; 2014. Fiction.)
I’m cheating here because this is the final book in the Last Policeman trilogy, which means, yes, I am actually recommending three books. They’re not heavy, though, and Henry Palace is not simply another quirky detective; he is a character who will roam the rooms of your imagination for a long time.

■ Before the Fall (Noah Hawley; 2016. Fiction.)
It’s unsurprising that the flow of this “thumping good read” is reminiscent of great television; Hawley is a television writer and producer. (Commonplace book entries here.) My “Honorable Mention” recommendation would be Fierce Kingdom (Gin Phillips; 2017). This beautifully written and almost recklessly fast-paced thriller is destined for big-screen treatment. (Commonplace book entries here.) Pack either or both of these in your vacation bag.

■ Lincoln in the Bardo (George Saunders; 2017. Fiction.)
Whether or not you ordinarily like audiobooks, you must hear Saunders’ first novel to appreciate how original and remarkable it is. My husband and I listened during trips to and from the University and in and out of Chicago, and we are still talking about this beautiful book. (Related article here.) Neither of us were surprised to learn that it will be a film.

■ Fatale (Jean-Paul Manchette; 1977 (2011, English). Fiction.)
In the “slim book you can finish in a day” category, I shook things up earlier this year by recommending this dark, odd character study over the other contender, News of the World (Paulette Giles), which didn’t need my recommendation, anyway, as it was touted by everyone and her mother.

■ American War (Omar El Akkad; 2017. Fiction.)
This is my entry in the “best post-apocalypse / dystopia / it’s a mad, mad world fiction read this year” category. Others chose The Power (Naomi Alderman) or The Book of Joan (Lidia Yuknavitch)… but I think I’m right on this one.

■ A Whole Life (Robert Seethaler; 2014. Fiction.)
In 2015, I noted that Maria Beig’s novel Hermine: An Animal Life (translated from the German by Jaimy Gordon) is perfect, so comparing my experience of A Whole Life (translated from the German by Charlotte Collins) to Hermine is the highest praise I can offer this beautiful and deceptively simple novel. See also this review from The Irish Times, which draws parallels to Stoner (John Williams) and So Long, See You Tomorrow (William Maxwell), two books that would, like Hermine, easily earn a spot in my “Essential Bookcase.”

■ Evicted: Poverty and Profit in the American City (Matthew Desmond; 2016. Non-fiction.)
This is the sort of book everyone talks about and shares articles about but never reads. I recommend that you actually read it.

■ Reclaiming Conversation (Sherry Turkle; 2015. Non-fiction.)
“They decide there should be a rule: A good friend should keep you off your phone when you are together.” (p. 157) Don’t miss this thought-provoking exploration of what has been lost since people turned away from each other to connect via phone.

■ The Road to Jonestown: Jim Jones and the Peoples Temple (Jeff Guinn; 2017. Non-fiction.)
This well-researched account fascinates and saddens: If it were all so inevitable, how did no one prevent the tragedy?

■ Briggs Land, Volume 1: State of Grace (Brian Wood; 2017. Graphic fiction.)
I thought I was going to recommend Wood’s The Massive, Volumes 1-5, and then I remembered how strong the opening to his new series is… and how annoyed I was by the resolution of The Massive.

4 thoughts on “The year in books”