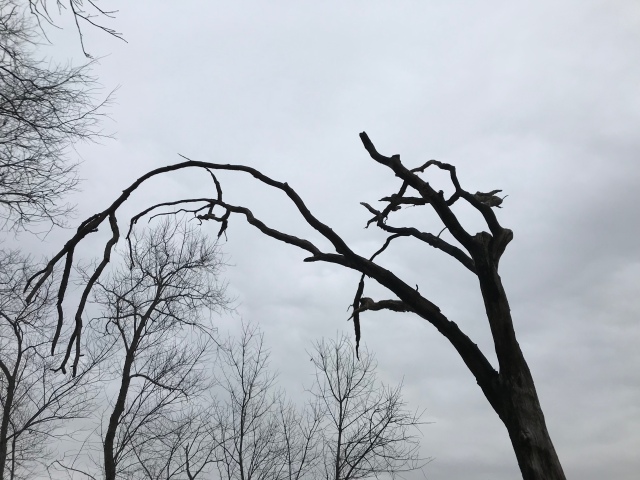 It’s not that I’m never sick, but I have been pretty fortunate. Sure, five years ago, I spent much of the late summer and early fall battling an upper respiratory infection, and, yes, I’ve had a couple of colds since then, but mostly it seems that I am able to vanquish the occasional illness quickly.

On Friday, November 9, though, I succumbed to a clinging, cold-like bug. Fever, chills, and fatigue nearly caused me to miss a play on Saturday night. (Afterward, we mused that it was, in fact, quite missable, something we’ve said about only one other play in eight years.) Coughing and exhaustion forced me to call out of work on Thursday, November 15, but apart from post-nasal drip and a lingering cough, I felt much better on Thanksgiving. On Black Friday, however, I awoke to “stomach flu” and an impressive fever. (It may have been the guacamole; no one else had any.) When that subsided twenty-four hours later, I needed to focus on post-holiday travel and the blizzard. Given how physically weak I was, my husband and I decided that I would drive my youngest back to university and remain overnight, and he would stay home to keep up with the snow clearing — which would have been great decisions, had my daughter and I discovered the leak in the new air mattress before 2 a.m. Monday. Heh, heh, heh. “Boy, will I sleep well tonight!” I announced when I returned home. Nope. Another night of broken sleep.

So… I spent the remainder of this past week catnapping and getting to bed early to put the kibosh on a lingering, low-level fatigue. It’s my fervent hope that one or two more nights will do the trick. It has, after all, been more than three weeks; I’d like to be done now, please.

The gloomy weather doesn’t do much to improve my energy level, either. The photo above was taken on a family walk Thanksgiving morning. I’m certain it has looked like that nearly every day since.

6 thoughts on “Sick and tired”

Leave a Reply to Bookish and Odd Cancel reply

● What Happened to Paula: On the Death of an American Girl
Katherine Dykstra; 2021

● The Complete Tales of Beatrix Potter