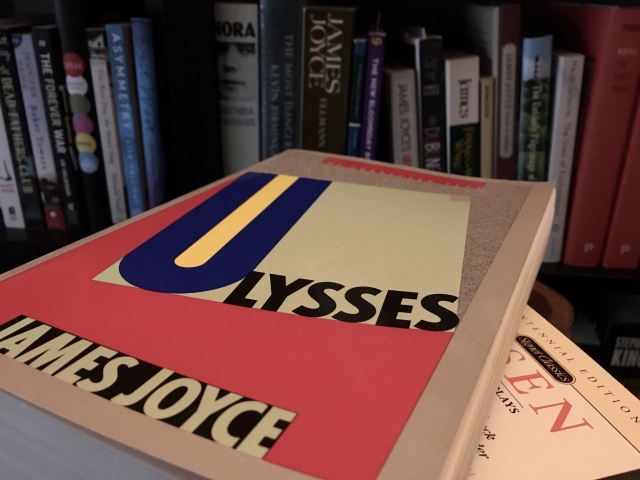 According to Goodreads, I began my reread of Ulysses on April 7 and had covered fourteen of the eighteen chapters by mid-May. Even with the accompaniment of James Heffernan’s lectures (four remaining now), however, the project was bit of a slog. My bookmark (by then a ticket from Remy Bumppo’s production of Bloomsday) camped at the boundary of the Circe episode until I had stamina to wander into Nighttown in mid-September. Once I crossed that 150-page expanse, though, completing this project was a matter of a week’s time.

Chapter 5, p. 66
Yes, bread of the angels it’s called. There’s a big idea behind it, kind of kingdom of God is within you feel. First communicants. Hokypoky penny a lump. Then feel all like one family party, same in the theatre, all in the same swim. They do. I’m sure of that. Not so lonely. In our confraternity. Then come out a bit spreeish. Let off steam. Thing is if you really believe in it. Lourdes cure, waters of oblivion, and the Knock apparition, statues bleeding. Old fellow asleep near that confessionbox. Hence those snores. Blind faith. Safe in the arms of kingdom come. Lulls all pain. Wake this time next year.

Chapter 13, p. 309
Curious she an only child, I an only child. So it returns. Think you’re escaping and run into yourself. Longest way around is the shortest way home. And just when he and she. Circus horse walking in a ring. Rip van Winkle we played. Rip: tear in Henny Doyle’s overcoat. Van: breadvan delivering. Winkle: cocks and periwinkles. Then I did Rip van Winkle coming back. She leaned on the sideboard watching. Moorish eyes. Twenty years asleep in Sleepy Hollow. All changed. Forgotten. The young are old. His gun rusty from the dew.

In anticipation of seeing A Doll’s House at Writers Theater next month, I also reread the Rolf Fjelde translation of Henrik Ibsen’s play.

Act I
HELMER: Well, but what of the people I’d borrowed from?
NORA: Them? Who cares about them! They’re strangers!
HELMER: Nora, Nora, how like a woman! No, but seriously, Nora, you know what I think about that. No debts! Never borrow! Something of freedom’s lost — and something of beauty, too — from a home that’s founded on borrowing and debt. We’ve made a brave stand up to now, the two of us; and we’ll go right on like that the little while we have to.

Act III
HELMER: Before all else, you’re a wife and a mother.
NORA: I don’t believe that anymore. I believe that, before all else, I’m a human being, no less than you — or anyway, I ought to try to become one. I know the majority thinks you’re right, Torvald, and plenty of books agree with you, too. But I can’t go on being satisfied with what the majority says, or what’s written in books. I have to think over these things myself and try to understand them.

● The Inferno of Dante: A New Verse Translation
Robert Pinsky; 1995

● What Happened to Paula: On the Death of an American Girl
Katherine Dykstra; 2021