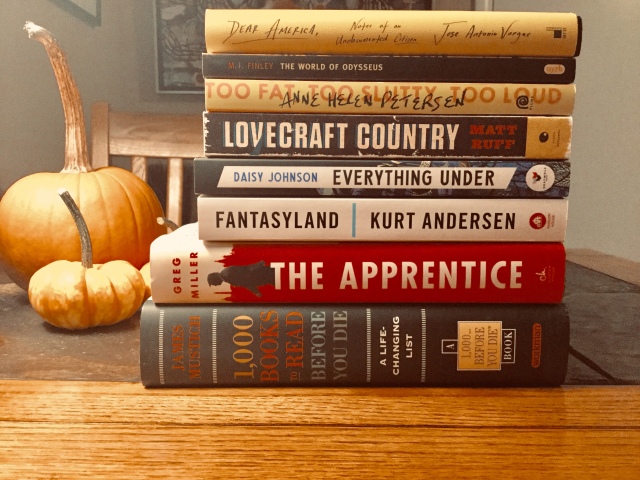 Earlier this week, I finished Gorilla and the Bird, Zack McDermott’s 2017 memoir. For the commonplace book:

p. 20
Watching my mom tutor eighteen-year-olds who read at a second-grade level — who considered our humble abode the Taj Mahal because we had a weight bench and a Sega Genesis — showed me that the difference between the track to prison and the track to grad school boils down to approximately a thousand consecutive nights of Clifford the Big Red Dog and Where the Wild Things Are, along with being told by someone who loves you: “A writer is always writing” and “A writer’s job is to tell the truth” and, once, “A writer is a liar. A good writer is a good liar. And you’re a silver-tongued devil, boy.” In other words, being lucky enough to have the Bird or someone like her as your mom.

p. 73
I spent my whole life trying to get out of this place. It’s as familiar as an identical twin, and yet I still can’t wrap my head around the fact that this is the factory where I was assembled.

The place to which McDermott refers is Wichita, Kansas. One of the books I’m now reading, Heartland: A Memoir of Working Hard and Being Broke in the Richest Country on Earth, is set just thirty miles outside of that city. From an NYT review of the National Book Award finalist:

A deeply humane memoir with crackles of clarifying insight, “Heartland” is one of a growing number of important works — including Matthew Desmond’s “Evicted” and Amy Goldstein’s “Janesville” — that together merit their own section in nonfiction aisles across the country: America’s postindustrial decline. Or, perhaps, simply: class. It’s a term that Smarsh argues wasn’t mentioned during her childhood in the 1980s and ’90s. “This lack of acknowledgment at once invalidated what we were experiencing and shamed us if we tried to express it.”

I’m thisclose to finishing the Kristin Lavransdatter trilogy, and I have recommitted to Vonnegut’s The Sirens of Titan. Now I need to figure out where to put the recent acquisitions: the TBR pile or the shelves?

● On the Origin of Species
Charles Darwin; 1859
With The Catherine Project.

● Girl, Woman, Other
Bernardine Evaristo; 2019
For a Cardiff BookTalk program. (Attended the program but fell behind on reading.)