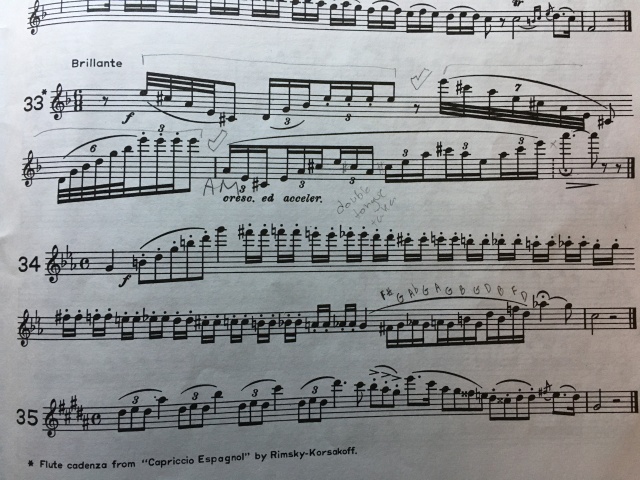 It’s impossible to explain the brain tic that made the Rimsky-Korsokov completely readable, while my repeated errors in 34 finally reduced me to writing it out during a particularly grueling practice session. (Yes, I probably should have erased it once I had “mastered” the passage, but that is, after all, how this sausage finally got made.)

With ornament exercises 34 and 35 (which, coupled with 33 in December, kicked my amateur musician’s capacious ass), I completed the Rubank Advanced Method: Flute, Volume II, at last night’s lesson. That’s kind of a big deal. Even my no-nonsense teacher took a moment to appreciate the accomplishment.

In addition to scale and tone exercises and P. Bona’s rhythmical articulation studies, I am now working in Robert Cavally’s Melodious and Progressive Studies from Andersen, Gariboldi, Koehler, and Terschak for Flute, Book 1. And in addition to my solo piece (currently Handel’s Flute sonata in G major (HWV 363b)), I prepare my part of a new (reasonably short) duet each week.

Later this month, band rehearsals begin: twice weekly plus sectionals. At that point, I think I’m looking at another increase in practice time:

I’ve already met with musicians in my section and reviewed the selections from last semester. The music is fun but not too challenging — perfect for someone who wants to (re)learn how to play well with others before tackling the challenges of say, the first and second flute part of “Variations on a Korean Folk Song” or Shostakovich’s “Festive Overture.” * Preparation for duets with my husband, who has recently taken up the clarinet, and some exploration (e.g., sight reading exercises and revisiting the pieces in my repertoire, such as it is) will comprise “other.”

* Which is what I was assigned when I joined the community band of the local college two years ago this month. The group is lovely, and the flute players I sat between were not only solid musicians but kind, patient teachers. Still… The music would represent a challenge to me now. Then? It was almost impossible. “Play what you can,” everyone says, but I felt as if I had missed a key step in my development as a musician. In high school, you usually do some learning and growing in concert band before you earn a spot in wind ensemble, you know? So I have joined the adult equivalent of concert band.

One thought on “Flute adventures”

● The Storytelling Animal: How Stories Make Us Human
Jonathan Gottschall; 2012

● Providence of a Sparrow
Chris Chester; 2002 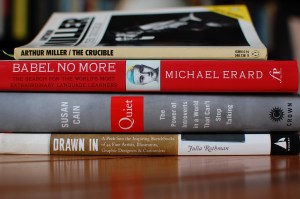